I have studied jaguars in northwest Mexico and southwest United States for the last 14 years. In 2003 I had the opportunity to study jaguars in the Sierra Madre Mountains of Sonora, Mexico, about 125 miles south of the international border. I was lucky to see two (one female and one male) and several mountain lions in the wild, while I surveyed remote canyons, mountains and valleys in search for their tracks, scat, a cached kill or a scratched tree. A year later I volunteered for a jaguar project in Arizona, west of Nogales. It was very interesting to see the similarities in the environment – topography, vegetation, and wildlife species, of two places occupied by jaguars, yet separated by cities, highways, borders and all sorts of human activity. Then in 2006 I initiated a project on both sides of the international border, searching for the corridors – the passages that wildlife use to go from one location to another – that would connect these and other sites where jaguars have been recently recorded. 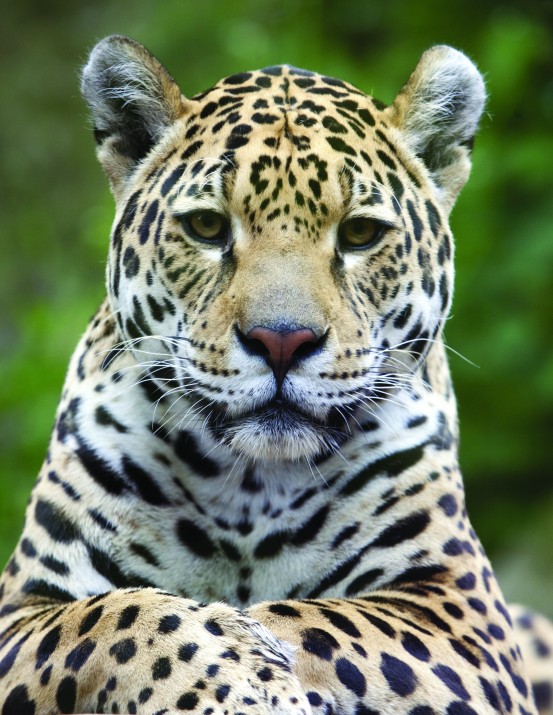 The time looking for and studying northern jaguars has changed my life. I’ve spent countless hours in the field, hiking, tracking, setting up wildlife cameras to capture big cat images, as well as other wild animals that live in the same places. I have found their kills and scat, and memorized details that distinguish the track of a jaguar from that of a mountain lion. Spending time in the field on both sides of the border has given me insight into the lives and habits of northern jaguars; two specific things come to mind: 1) Jaguars are secretive, stealthy animals that don’t want to be seen, and 2) Wherever they go, jaguars know where the food, water, open space and mates are, but don’t know what country they are in. If we are able to imagine our shared landscape from the jaguar’s perspective, it’s easier to understand where, why and how they have lived in the region for so many years.

I have also met people who live, work and think about jaguars. Conservation groups, government agencies, researchers and landowners working to address jaguar conservation, and instill a land ethic that allows for the coexistence of humans and big cats. But there are also people who don’t agree with jaguar conservation or have a limited understanding of jaguar behavior and ecology. Here I share more than a decade of field observations to address common questions and misconceptions about northern jaguars.

Jaguars in the U.S.?

Jaguars are well-known as the big cat in the jungles or tropical forests in the Amazon River basin, but it’s hard to imagine jaguars living in Arizona. However, there is compelling information of their continued presence in our region. The earliest report of a jaguar in Arizona or New Mexico listed in “Borderland Jaguars” (Brown, D. and C. Lopez-Gonzalez, 2001) – the best compilation of reliable historic and recent jaguar records via hunting reports, photographs and historic anecdotes – is from 1900. The number of confirmed reports in both states up to 1996, amounts to almost 60 records. There are records as far as the Grand Canyon.

By any measure, the fact that jaguars currently live and have occupied territories in the U.S. southwest and northwest Mexico for more than a century, affirm the presence and belonging of this species to our region.

What has changed? Why are they coming back?

Jaguars never left! They are a secretive species that thrives in anonymity in remote locations. They avoid human settlements and activities at any cost, and will travel through rugged terrain, canyons and creek beds to stay out of trouble.

Complementary reasons for their continued presence are the large expanses of habitat on both sides of the border – mountain ranges connected by valleys that run north-south, from the Sierra Madre Mountains to the Mogollon Rim. In addition to their regular territories, jaguars and other wildlife find corridors and passages that allow them to travel large distances. Habitat connectivity, from large private properties and conservation areas in Mexico to national parks, wildlife refuges and other protected areas in the United States, is vital for the long-term survival of the species. At a larger scale, those individual protected areas on both sides of the border are the stepping-stones for jaguars to move through and reach new potential territories. Additionally, the region provides diverse, healthy and numerous potential prey species for the jaguar: White tail and Mule deer, and White-collared peccary or javelina are their preferred prey; but other wildlife species can also be food: coatis, skunks, and other medium-sized mammals; rabbits, jackrabbits, quail, wild turkey, and more. I have observed two instances of jaguars scavenging on dead animals; an uncommon observation for cats, which could misguide a rancher thinking a jaguar eating a cow, is a “cow-killer.”

There is one thing that has changed for jaguars in the last 20 years: human awareness. In 1996, two Arizona houndsmen photographed two different jaguars in two distant locations of the Arizona border. To their credit, these two men shared those photographs and with these, sparked a vision that jaguars could travel north and set up new territories in the United States. Researchers, conservation groups, and citizen scientists now set up remote cameras, look for tracks and collect their observations; other groups have started systematic monitoring in large tracts of land, compensate land owners who protect the cats or support alternative economic activities that don’t affect jaguars or their prey.

There are no females recorded in Arizona in recent years, why?

From 1996 to 2017 there is at least one record of a jaguar each year in the borderlands of Arizona, New Mexico and Sonora; at least ten different male jaguars in more than 20 years. No female jaguar has been confirmed in the U.S. since 1963; however this does not mean females are not present in the region. For one, the continued presence of males is an indicator of the existence of breeding females – their mothers. Females roam less than males and are generally more careful, either because they are raising cubs, or avoiding conflict with other jaguars or other large predators (i.e. mountain lions, black bears), so it’s perfectly normal that they are discovered less frequently. Simply put, not seeing (photographing, recording) female jaguars does not mean they don’t exist here. In fact, it is the nature of the jaguar to live as a secretive species that moves, travels, hunts and breeds in remote, isolated ranges of our region.

We still have a long way to go for jaguar recovery in the region, but we are going in the right direction. Long-term surveys must be implemented in suitable habitat in southern Arizona, New Mexico and northern Sonora, in order to find both males and females. Habitats must be protected and the potential risks to species survival fully considered with any proposed barriers so that common ground can be found.Conservation and recovery of the northern jaguar depends on source populations in northern Mexico, and the corridors that connect them to potential habitat in the U.S.

Conservation depends on the actions, partnerships, and joint efforts in the U.S. and Mexico. Successes, lessons learned, and failures must be shared for the benefit of jaguars and all wildlife. Jaguar conservation efforts benefit all plants, animals and habitats where they live, and allow people to work on a common goal.